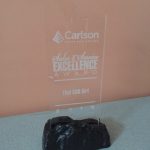 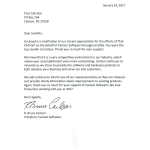 This is the 7th year in a row that That CAD Girl has been the top reseller for Carlson Software but the first time I’ve received an award or anything “official”. What a nice surprise!

As much as I appreciate the recognition I need to turn it around and thank the mighty-band of loyal customers, far and wide, who have helped grow this business. If it wasn’t for your referrals and requests for conference speaking engagements, etc, it wouldn’t have gone anywhere.

Jeremy Taylor, “That CAD Guy”, has definitely helped grow the hardware side of the business (by a LOT!) and been a fantastic resource for both me and our customers. I think you’ll be seeing more of him teaching classes because he’s awfully good at it… 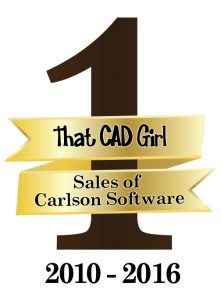 It’s an exhausting but fun few weeks each November and December and they continue to step up with their support and service. Lee Guerringue is the only one not in the pictures (she’s usually behind the camera) but has contributed our “Greatest Hits” and much more.

Thanks to everyone and here’s to an even better 2017!