Carlson Software made the 2016 version of their desktop software available for download yesterday. The products released include all desktop products that run with the included IntelliCAD or on top of your own AutoCAD-based software. The 2016 OEM/embedded AutoCAD versions of Survey and Takeoff are expected to be released in a month or so. 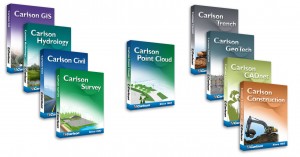 You can see the full list of Carlson 2016 Improvements here.

If you are currently on Carlson’s maintenance plan, you can click here to find your 2016 serial number. You’ll need your 2015 serial number and primary contact information for the owner of the software. If you have trouble, feel free to email me and I’ll do what I can to help get you up and going. Or, request a proposal to upgrade or renew your maintenance now.

I can provide a 30 day trial if you’d like to test-drive for a bit and am also offering a free test-drive to one of my upcoming webinars. Starting with tomorrow’s Introduction to Carlson Software – Settings, Setup, Configuration & Points webinar, I’ll be presenting in the 2016 software.

If you’re curious how Carlson compares feature- and price-wise to Civil 3d, Land Desktop, Eagle Point, Terra Model or others, email me or follow these links to request a demo or request a custom proposal.